Who Is At Fault For A Rear-End Crash? 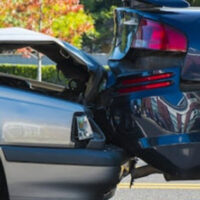 Rear-end collisions in the Shreveport area occur somewhat frequently, and these crashes can be minor or may result in severe injuries. Indeed, according to the National Highway Traffic Safety Administration (NHTSA), rear-end crashes account for nearly 30 percent of all collisions, and they result in “a substantial number of injuries and fatalities each year.” In some cases, a rear-end wreck will happen after two vehicles have already come to a complete stop at a red light or stop sign (such as when the rear driver mistakenly steps on the gas after coming to a complete stop), and the damage from a collision may be minimal. However, even in many rear-end crashes that occur at stop signs or red lights, a rear motorist collides into the vehicle in front at a high speed and can cause devastating injuries. In addition, rear-end crashes can happen at higher speeds in different scenarios, and vehicle occupants in either car may sustain debilitating injuries. If you were injured recently in a rear-end auto collision, you may be wondering whether the rear driver is automatically at fault.

While the rear motorist is often to blame for a rear-end crash, there are also other circumstances in which different parties may be responsible for injuries. Consider some of the following information from our Shreveport traffic collision lawyers.

Rear Motorist Could Be At Fault

The NHTSA suggests that rear motorists are often the parties who are at fault for rear-end collisions. These motorists may have been engaged in one or more negligent behaviors that ultimately resulted in the crash, such as:

A driver’s visual attention is one of the leading issues, according to the NHTSA, in rear-end crashes. Even when a driver glances away from the lead vehicle for a short amount of time, it may be difficult to hit the brakes in time. At the same time, the NHTSA also explains that driver inexperience can play a role in some rear-end collisions. For example, as experienced drivers approach a stop sign or a red light, they know to begin braking early and to slow down upon their approach. For teen drivers and other newly licensed motorists, however, the practice of gradual braking in order to come to a safe stop may not always occur.

Lead Driver Could Be At Fault

While most people assume the rear driver is to blame, it is important to know that the lead driver may also be at fault. Some common scenarios in which a lead driver’s negligence may have caused the accident include, for example:

Designer or Manufacturer of Defective Vehicle Part Could Be At Fault

If you were injured in a rear-end crash in Louisiana, one of the Shreveport rear-end collision lawyers at Rice & Kendig, LLC can help you with your claim.

By ​Rice & Kendig, LLC | Posted on December 20, 2022
« Who Is Liable For A Motorcycle Crash?
What Type Of Evidence Can Prove Distracted Driving? »