Close Menu
Shreveport Injury Lawyer > Blog > Motorcycle Accident > Who Is At Fault For A Motorcycle Crash?

Who Is At Fault For A Motorcycle Crash? 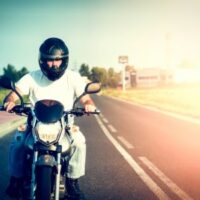 Motorcyclists often sustain serious and life-threatening injuries in crashes, particularly when they are involved in collisions with automobiles. The Insurance Information Institute (III) explains that “motorcycles are by their nature far less crashworthy than closed vehicles.” As a result, motorcyclists are more likely to suffer injuries in a collision than occupants of a passenger vehicle. Moreover, according to the III, “motorcyclists and their passengers are more vulnerable to the hazards of weather and road conditions than drivers in closed vehicles.” Motorcycle crash fatalities have generally risen over the last decade, and in 2020, a total of 5,579 motorcyclists were killed in wrecks while more than 83,000 motorcyclists suffered injuries.

If you or someone you love got hurt in a motorcycle crash in the Shreveport area, it is critical to seek advice from a Shreveport motorcycle injury lawyer who can assist you.

Who is commonly at fault for the kinds of motorcycle crashes described above? Any of the following parties could be liable depending upon the circumstances of the wreck:

Proving Fault After a Motorcycle Wreck

Your medical records will be important to prove that you suffered your injuries in the manner you have alleged in your claim, and a police report can often provide further support for your case. In particular, in crashes involving another motorist in a car or truck, it is critical to ensure that you call the police so that they can arrive at the scene, assess the crash, and create a police report. In some cases, a motorist who was at fault for the collision may be cited by the police or could even face charges for reckless operation of a vehicle. Under those circumstances, a police report and an arrest record may prove essential for your case. At Rice & Kendig, LLC, we obtain necessary medical records and police reports for our clients. You do not need to worry about obtaining copies of these documents since our firm will take care of it for you.

If you were injured in a motorcycle wreck, you should get in touch with one of the experienced Shreveport motorcycle accident attorneys at Rice & Kendig, LLC to discuss your options for filing a claim.