Close Menu
Shreveport Injury Lawyer > Blog > Rollover Accident > Have You Been The Victim Of A Louisiana Rollover Crash?

Have You Been The Victim Of A Louisiana Rollover Crash? 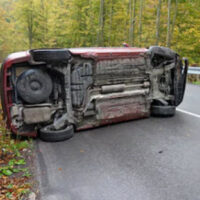 Any car crash has the potential to cause serious injury or even death, but a rollover accident is by far the most potentially deadly. Statistics show that while the number of rollover accidents on U.S. roads is relatively small, they are responsible for a disproportionate number of road fatalities – data from the National Highway Traffic Safety Administration estimates that in one year, rollover crashes made up around 3 percent of the total number of wrecks – but accounted for almost 20 percent of the fatalities.

It is true that the majority of rollover car wrecks are single-vehicle crashes, but this does not mean that no one else was involved. If you believe that your or your loved one’s rollover was caused by someone else’s negligence, you may want to discuss your options with a Shreveport rollover accident attorney. Injuries in these wrecks can be severe, and if you feel that someone else is responsible, you have the right to try and hold them accountable.

Rollover collisions are most often single-vehicle wrecks, meaning that only one vehicle suffers damages (and its occupants suffer injury). However, too many people read this and think that the fault for such a collision would lay entirely with the driver. Sometimes, this is the case – for example, a common scenario for a rollover crash is when someone driving an SUV (or other vehicle with a high center of gravity) speeds, or drives while under the influence of alcohol or another substance. The lack of care being taken plus the vehicle’s lack of grip on the road can easily lead to the vehicle flipping, causing serious injuries.

That said, there are several potential causes for rollover accidents that can come about as a result of someone else’s negligence. One of the most common is a fault in either a part of one’s vehicle or in the vehicle as a whole – for example, tire blowouts, defective brakes, and faulty suspension can all cause a vehicle to roll over. Alternatively, it is common for another vehicle to be involved in what later turns out to be a single-vehicle collision – a crash in Louisiana in August 2021 allegedly involved a pickup rolling over after being sideswiped by another vehicle that later drove away.

Another factor that can lead to a rollover crash is the state of the road at the time of the incident. Louisiana’s roads are sometimes in a poor state, or are in the process of being repaired, and this can sometimes create obstacles that increase the likelihood of vehicle crashes.

If you believe that your wreck was caused by the negligent behavior of another person or entity, you do have the right to file suit against that person. However, it can sometimes be difficult to determine the person against whom you should file suit – for example, if you suspect that poorly maintained brakes caused your collision, you may not know whether to file suit against the manufacturer, the mechanic, the vehicle company, or all three.

An experienced Shreveport-Bossier County rollover crash attorney from Rice & Kendig can help answer any questions you have about your case. Rollover vehicle crashes can be deadly, and if you have been through one due to someone else’s negligent behavior, you have the right to seek recovery. Call our offices today at 318-222-2772 for a free consultation.

By ​Rice & Kendig, LLC | Posted on January 19, 2022
« Understanding How To File A Personal Injury Claim
Bringing Suit For Wrongful Death In Louisiana »